That was yesterday, girl 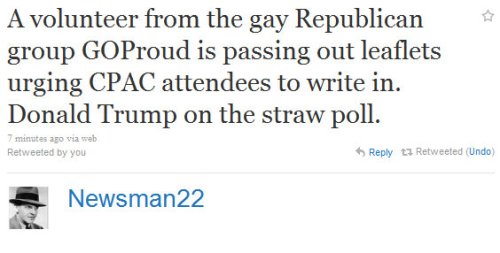 It is anyone’s guess who’ll receive the 3rd Annual GOProud Tramp Stamp of Approval on February 10, 2012. However, it is a safe bet he (or she) will be rabidly conservative, loathsome, filthy rich and so full of himself that he’s stacked inside himself like a set of matryoshkas.

Comments Off on That was yesterday, girl

From now on the League of Cool will determine how you spell your name [via WaPo]:

Before becoming the 26th President of the United States, Theodore Roosevelt led the First U.S. Volunteer Cavalry, dubbed the “Rough Riders.” The District high school bearing Roosevelt’s name took that on as a name for its athletic teams.

When the school ordered new basketball uniforms prior to this season, Athletic Director Daryl Tilghman was surprised to see “Ryders” across the front of the jerseys. Tilghman called the vendor to complain … and was told “Ryders” was the “cool” way to spell it.

This comment on the story sums it up best:

Comments Off on Lame Du Jour

In case you haven’t heard, some dipshit from my neck of the woods has aroused the ire of the FBI, the DHS, the USPS and assorted other humans with weapons and big serious briefcases because he suffers from Road Sign Rage.

The first “incendiary device” was opened around 12:25 p.m. by a mailroom employee, who singed his fingers, in the Jeffrey Building, just steps from the State House in downtown Annapolis. The small white, book-sized package, which was affixed with five holiday-themed stamps and addressed to [Gov. Martin] O’Malley, ignited in a small puff of smoke and smelled of sulfur.

END_OF_DOCUMENT_TOKEN_TO_BE_REPLACED

The TSA doesn’t just want to irradiate your balls. Or so hopes says Loudoun Co. Supervisor Eugene Delgaudio [via WUSA9]:

A widely distributed e-mail written by Delgaudio for the Public Advocate* about TSA, claims the pat downs are part of a “Homosexual Agenda.”

Delgaudio goes on to whine because the TSA doesn’t discriminate against gays and lesbians and then spells out the horrible truth behind TSA pat downs:

“That means the next TSA official that gives you an ‘enhanced pat down’ could be a practicing homosexual secretly getting pleasure from your submission.”

Dream the fuck on, shrimp dick.

Thank God for the Potomac. I’m convinced it keeps massive levels of assholery out of D.C. & MD.

END_OF_DOCUMENT_TOKEN_TO_BE_REPLACED

Filed under Local Fail, Republicans and other Perverts, We're from the government

Sometimes your ex-governor gets on my balls. Then she makes me laugh and I stop hating you (via WaPo):

Brian Murphy, a little-known Republican candidate for Maryland governor, unexpectedly won an endorsement Wednesday from one of the biggest names in national politics: Sarah Palin. [Biggest names? It would be biggest joke if you assholes would stop treating her like she’s more than a two-legged collection plate for Sarah Palin Charities, Inc. – ed]

Here in Maryland, we’re a diverse bunch. Even our most infamous modern-day fReichtard in an African-American.

We do not make a habit of electing complete frothing psychos to office [Looks at Texas]. When we do elect Republicans we tend to elect guys like Wayne Gilchrest, an early victim of the GOP’s shift from a quasi-functional party to a bunch of lunatics writing conspiracy theories on the wall with their own shit. And to be perfectly fair, Ehrlich is no Rick Perry. Or Sarah Palin.

All of this is a long winded way of saying, if I were going to make a list of states that are screamingly obvious no-go areas for teabagger candidates, I’d put Maryland at #1. (D.C. isn’t a state.) I know this, anyone with two brain cells to rub together knows this. Palin … Well. She’s dense as a block of government issue cheese, slightly less intelligent and a tap-dancing attention addict to boot, isn’t she?

Palin’s decision to side with Murphy over former governor Robert L. Ehrlich Jr. (R) in September’s GOP primary prompted plenty of head-scratching in Maryland political circles. But it remained unclear what impact the endorsement might have in a state where the “tea party” movement has not packed nearly as much punch as elsewhere. [“Head scratching” is Neo-Con fearing reporter speak for great BWAHAHAs of laughter – ed.]

The teabaggers haven’t packed a punch (or a flailing slap) in Maryland, because we’re not crazy. And I’m not sure Mr. Murphy is crazy enough. The only thing I see on his issues page that isn’t boilerplate GOPese is his desire to start homes for unwed mothers.

OK, maybe that is crazy enough.

Or maybe Palin is just jealous of ex-governor Ehrlich because she’s the only goshdurn ex-governor anyone should pay attention to also.

Ah, you’re right. She’s got the political acumen of a stunned pigeon and has come to associate flapping her yapper with a rain of $$$,  God bless her. She just made the GOP goobernatorial race interesting.

END_OF_DOCUMENT_TOKEN_TO_BE_REPLACED

Filed under Local Fail, Mental Health, Republicans and other Perverts